Cocow is driven. Driven by curiosity and the desire to express herself and her feelings through painting, while visually capturing themes which are important to her. This never means depicting the visible exactly as it is in nature, on the contrary Cocow’s theme is the inner world of fantasies and visions, of dreams and realisations, of emotions and memories, of fears and feelings of happiness. Cocow’s pictures are not easy to describe – and not at all easy to interpret. Cocow finds her themes in the news just as in that which she sees and records in her daily surroundings, that which stirs emotions within her. And these emotions become visible and tangible in her pictures.

Constantly in Search of Something New.

Cocow is always in search of something new – and in being so she is always redefining herself. Cocow is continuously taking on new challenges and trying to overcome them. In all of this, she never lets herself change course in the artistic process, moreover she lets no one and nothing prevent her from painting exactly that which makes up her themes. This is true even when there are some topics which need more time to be realised as finished visual works than at first thought: these are visualised in exactly the way which she believes lets her express precisely what must be expressed.
And so it is no surprise that Cocow, by way of example, has for years been grappling in her pictures with a topic which is almost threatening to split society today: immigration.

An Excellent Feeling for Harmony.

Cocow has mastered painting materials and works with them like a virtuosa. This goes alongside her natural feeling for the harmony of colours. In the process, Cocow does not only experiment with colours but also with the quantitative interaction of the colours themselves and in this way levels of colour are reapplied again and again, so that her images experience a kind of three-dimensionality and every picture can be “conceived” as haptic. New materials are always being tried out and placed at the centre of the creative process.

Immerse yourself into the world of

and allow yourself to be enchanted. 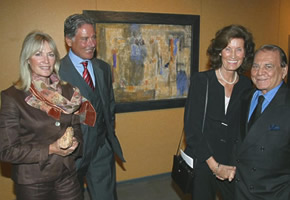 Her numerous national and international exhibitions only intensify COCOW‘s “addiction” to painting. And her success proves her right. For a long time now, established collectors have been among her clients and her friends … 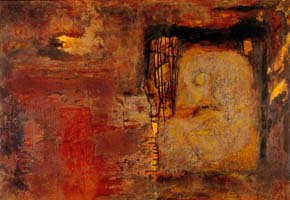 COCOW finds the themes of her dense material works in life itself. In the oscillating ambivalence of truth versus lies, unveiling versus masking, beauty versus unseemliness …

Cocow creates frames of her own design to accompany her paintings. The clear shapes, surfaces and colours of the frames contrast in a fascinating manner with the organic structures of the images.