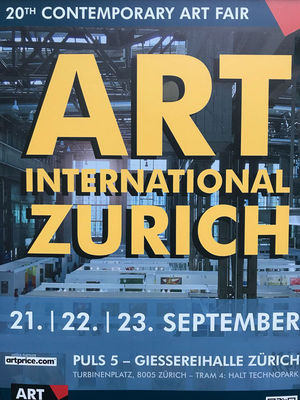 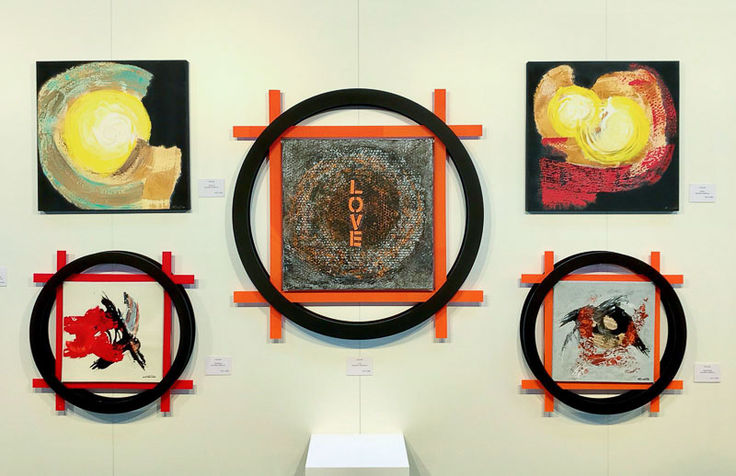 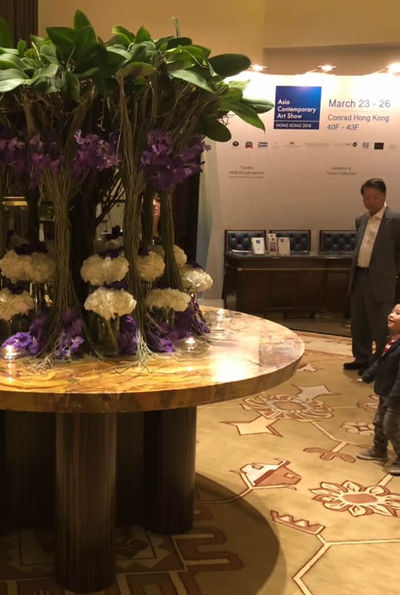 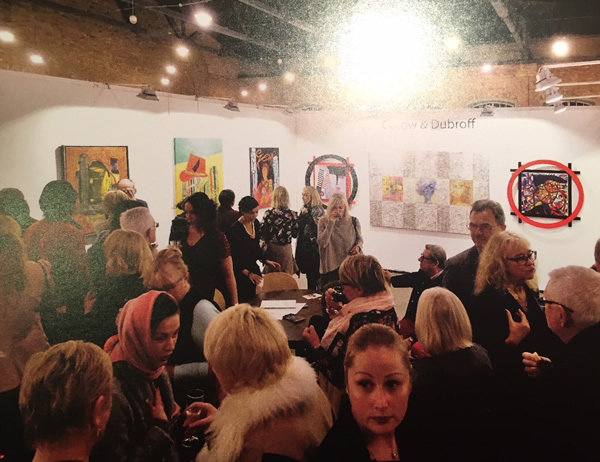 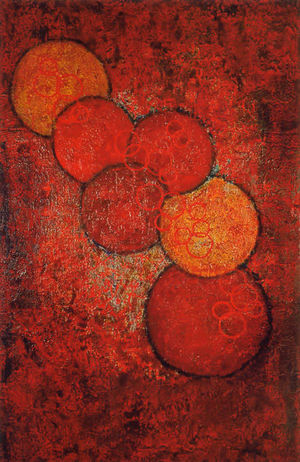 Sometimes you can make something out: faces, bodies, eyes, couples. Sometimes letters, crosses, mysterious hieroglyphs flash from the base of the images. Cocow’s pictures are neither simple to describe nor easy to interpret. The artist with Latvian-Swedish background is self-taught and cannot be ascribed to any particular art movement. Will a glance at the title help? Concepts such as “Justice”, “The Shaman”, “Message II”, “Ice Age” and “Woman’s Different World” allow us at least to surmise that for the painter it is not a matter of depicting the visible in a true-to-life fashion. Her subject matter is the inner world. Dreams and realisations, emotions and memories are condensed into drawings and appear like calls from a distant sphere. It is thrilling to embark upon this – and fascinating to experience how Cocow’s works reach our subconscious: with pictorial surfaces whose cracked and weathered nature calls old walls to mind – and with colours which morph into pure energy. Archaic power and Mediterranean warmth, authentic expression and sensual proximity – the onlooker is soon riveted by them and wonders: “What is this picture doing to me?”

2010
Exhibition at the Bavarian State Ministry of Economy, Transport and Technology in Munich 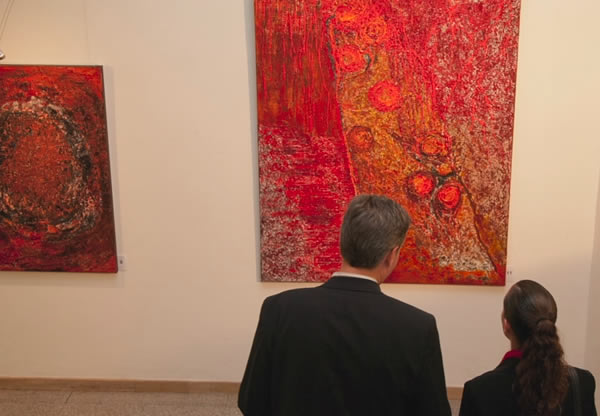 The Latvia-Swedish artist Cocow, living by Lake Tegernsee, occupies herself in her works above all with the cycle of life – its ever-recurring structures, its emotions, its human anchorages. Driven by curiosity, she attempts to capture this in her expressive works. Her art can be understood as an experiment, precipitated by precisely this curiosity and her courage to get to the bottom of things.

The subject matter of her dense material works are found by Cocow in life itself. In the oscillatory ambiguity of truth and falsity, of unveiling and masking, of beauty and ugliness. Precisely this binary, this riven nature has captivated her. She observes cultural structures and human behaviours with a critical eye.

This “coming closer to a subject”, the intense wish to comprehend is again found in her way of working with material and colour. It is painting with the hands. She usually forms the various layers of an image (up to eight different layers) by hand with sand, acrylics or plaster. In this way she carves out structures in a subtle manner and allows colour and form to become, by levigating, smearing or moulding, a harmonious whole. Distinct structural and pictorial worlds come into existence. And in particular this haptic aspect – the “comprehending” -  is a central feature of her artistic craft. With this she remains in direct contact with that which has been depicted, with the pictorial material and content – even far beyond the creative process. With respect to her choice of material (sand and Mallorquin earth, among others) and colour palate (strong, often earthy shades), she is also inspired by nature and by life. 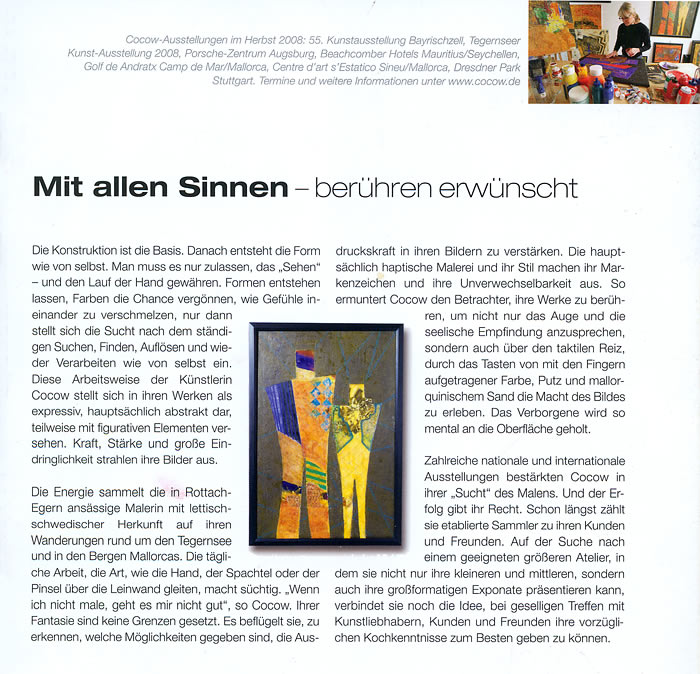 With all the senses – touching encouraged

The construction is the basis. After that, the form comes into being as though of its own accord. The artist must simply allow it to do so, to “see” it  -  and yield the flow of the hand. Allowing shapes to emerge, affording colours the chance to blend into one another like feelings, only in this way does the addiction to seeking, finding, dismantling and processing once again arise by itself. This working method of the artist Cocow illustrates itself in her works as expressive and principally abstract, at times embellished with figurative elements. Her images exude power, strength and great intensity.

The painter, based in Rottach-Egern and of Latvian-Swedish origin, gathers her energy during her hikes around Lake Tegernsee and in the mountains of Mallorca. The daily work, the way in which the hand, the palette knife or the paintbrush glide over the canvas, make her addicted. “When I’m not painting, I don’t feel well,” says Cocow. Her imagination knows no limits. She is given wings when she recognises new possibilities to strengthen the expressive power of her pictures. Her mostly haptic paintings and her style make up her signature features and unmistakable quality. In this way Cocow encourages onlookers to touch her works, in order to appeal not only to their eye and spiritual perception, but also to let them experience the power of her image through its tactile allure and by feeling the colour, plaster and Mallorquin sand applied with the fingers. The hidden qualities of the painting are thus brought consciously to the surface.

Numerous national and international exhibitions have fortified Cocow in her “addiction” to painting. And her success proves her right. For some time established collectors have counted among her clients and friends. In her search for a suitable larger workshop, in which she can present not only her exhibits of smaller and medium size but also those of larger format, she has also linked the idea of showing her exquisite cooking skills during social gatherings with art lovers, clients and friends.

The Munich Society didn’t want to miss out on this one: at the opening of Art Week, around 400 guests visited the preview showing of the Spanish artist Cocow, who was exhibiting 32 vivacious paintings for the first time on Promenadeplatz. While enjoying Flamenco, a Spanish “flying” buffet and Ruinart champagne, the guests continued the celebrations in a jovial mood until long after midnight. Amongst them were: the actors Florian Böhm (grandson of Karl-Heinz Böhm) and Isabella Hantz, Thomas Hänle (of Ruinart) and Marius Lüond (of Omega).

2006
Exhibition at the Bavaria Film Studios 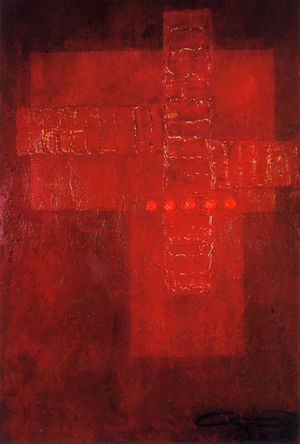 “I am still short of a COCOW-painting in Paris”

“We have met a number of times in Mallorca. Most of the times, your pockets are full of natural materials then and your head is full with new ideas.” Sabine Christiansen, a very well-known German news anchor, is smiling into the camera. The TV-veteran would have loved to come and see Corinna Wolfram’s - COCOW‘s - vernissage in person. “But my flight from India was delayed”. Nevertheless, Christiansen commended her favourite painter to the eighty guests bidden to the Bavaria Film Studios: “I love her paintings. Now I only need one of them for my new apartment in Paris”. COCOW, whose studios are located in Mallorca and at Lake Tegernsee in Bavaria, has long conquered the arts scene. Why? “Because there is so much power in her works”, says Christiansen. Among others, Bernie Paul, Cosima von Borsody, Walter and Gabi Dück and Thomas Hänle came to see for themselves.

Strong paintings, where once strong men were fighting

The artist “COCOW”, Corinna Wolfram, is exhibiting on the set of Asterix and Obelix of the Bavaria Filmstadt, Munich’s Cinema City.

A film set for a vernissage - is this at all possible? With a good choice of works, it is! A film set can underscore the works of art in their effect, and have them converse vividly with their context - much more intensely than would ever be possible with a background of white gallery walls. However, only the Bavaria Filmstadt succeeds in providing this kind of ambience. Now, for the first time, an art exhibition opened on its premises. In the Roman arena of the production “Asterix & Obelix take on Caesar” (1998, with Gérard Depardieu) the artist “COCOW”, Corinna Wolfram, who lives in Germany and Mallorca, presented thirteen of her large-format paintings. Art manager Dr. Christian Behr and Claus Semerak, a Munich art historian and gallery owner, welcomed eighty guests who were deeply impressed by the dramatic atmosphere of the exclusive setting. The paintings, immersed in red light, had an especially strong effect in this (fictitious) environment, where once the Gauls fought for their lives against dangerous gladiators, crocodiles and tarantulas: some paintings were fixed to the bars of the arena, some could be found inside of well-lit animal cages.

COCOW’s masterpiece, the blood-red and sculpturally moulded “Cloister”, was even mounted on a gruesome torture cart. That’s coming on strong! Unfortunately, the announced guest of honour, Germany’s first media personality Sabine Christiansen, whom COCOW is lucky to count among her friends and collectors, was not able to realise her planned visit of the private viewing: a trip to India for Christiansen’s new show format “Global Player” of the European stock market TV-channel CNBC had deranged the schedule. To make up for it, the queen of German TV news delivered especially heartfelt greetings from the screen to the exhibition guests. Christiansen praised COCOW’s serious approach - among other locations, she already exhibited her works in the Romano-Germanic Museum of Cologne three years ago. Her paintings made of acrylics, plaster and even Majorcan natural materials keep impressing her Berlin guests deeply and will soon radiate their tranquillity and strength in Paris as well, where the talk host from Berlin, who will hand over her show to Günther Jauch next year, is going to live with her third husband-to-be Norbert Medus. The vernissage guests evidently enjoyed the unique ambience - not without looking around for the tarantulas every now and then, that are said to have escaped at the time of filming …

2003
Exhibition in the Monet Art Diffusion Gallery in Palma 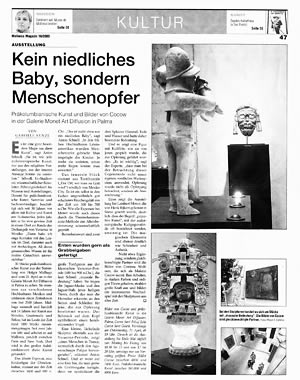 “There is a very special kind of magic around this art”, says Anton Schnell. “It is, like every other extra-European art, to be understood only on the grounds of religious notions, of inner statements.”
... COCOW’s paintings - this is what Corinna Wolfram calls herself as an artist - are emancipated partners. Her works, held in strong colours and earthy hues, radiate a great strength, and form an interesting synergy with the sculptures from long gone days.

2003
Exhibition in the Romano-Germanic Museum in Cologne 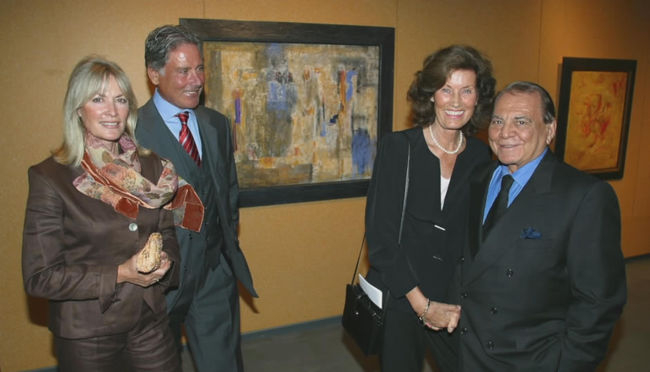 Dr. Wibke von Bonin on the occasion of the introduction to COCOW’s (Corinna Wolfram’s) exhibition in the Romano-Germanic Museum in Cologne on May 23rd, 2003:

… Driven by a yearning, the artist paints her works into the world of vision, which evokes a sense of pleasure in her. As she describes it herself, when painting, she dives into an inexhaustible realm of vision, carried by a wave of power.

Wide awake, however, she creates with these paintings most interesting artisanal combinations of acrylics, oil and Mallorca’s coloured sands, mixed with plaster and chalk, barely with a brush but mostly applied and smudged with her bare hands.

Come up close to the paintings to feel the velvety reliefs of oil and sand, just like layers of plaster eaten away from old walls with flaming reds inserted or hieroglyphs carved in.

COCOW is an astonishingly skilled master of her materials and techniques. She has a deft feeling for the harmony of colours, for her preferred interaction between warm hues of red, ochre and yellow. At the same time, she always succeeds at creating a formal balance, even if in one half of the painting nothing comes to pass as it were, when only nuances of colour need to hold their own to balance out the powerhouse on the other side …